Located at the Calton Hill World Heritage Site, the 25-square-meter shelter stands in a flagstone courtyard outside the art venue, which is in a 19th-century observatory.

The observatory, designed in 1818 by William Playfair to evoke a Greek temple, had previously remained empty until its transformation into an art center by Collective Architecture in 2018.

Glasgow-based O’DonnellBrown designed the playhouse to accommodate a variety of activities in the Collective’s learning program, including parts games and creative events for families.

Calton Hill Play Center is the latest in a series of shelters by the studio that is designed to promote outdoor learning during the coronavirus pandemic. Others include the Rainbow Pavilion and the Community Classroom in Glasgow.

“The playhouse demonstrates the adaptability of the design principles used in our community classroom project applied to a very sensitive location,” said O’DonnellBrown co-founder Sam Brown.

The basic structural approach used in these previous outdoor learning projects has been applied to the Calton Hill Play Shelter, which is designed to stay in place for at least three years.

“The client was a pleasure working with him to bring it into the historical context, creating a harmonious addition that also respects the principles of the circular economy,” added Brown.

O’DonnellBrown took inspiration from the classic observatory in the town opposite to determine the proportions of the whitewashed timber frame, which is constructed from bolted columns that can be easily dismantled.

“The rhythm and proportions of the surrounding 19th-century classical architecture determined the column spacing and the height of the roof,” the studio explained. 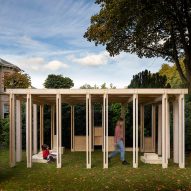 A polycarbonate roof covers the shelter and is raised slightly to create a space at the level of the skylight.

Wood panels fill some of the spaces between the columns, while others are left open to provide a number of entry and exit routes to the space.

To conceal the steel footings of the Calton Hill Playhouse, the yard slabs were temporarily removed and replaced to minimize the impact of the shelter.

The existing stone wall around the perimeter of the observatory conceals the shelter from the view to the outside, while protecting its open interior from the strong winds on the site.

O’DonnellBrown is an architecture studio founded in Glasgow in 2013 by Jennifer O’Donnell and Brown.

His outdoor classroom prototype, first established in the community classroom, is now being manufactured by furniture and design company Spaceoasis.

The photograph is by Ross Campbell.