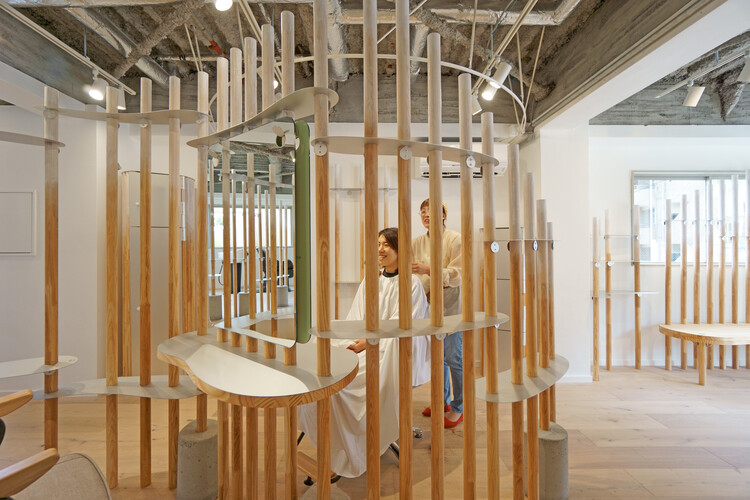 Design between landscape and interior – The hair salon we designed is located on the ground floor of a 34 year old building, a 5 story building with a flamed steel structure, facing the slope near Atami Town Hall in Shizuoka Prefecture. Atami City is famous for its hot springs. The site adjacent to the south side (lower side) is a site for the development of public facilities facing the intersection, but it is very open as no buildings have been built at present. Thus, this building has a lot of visibility (even if it does not face the intersection). Also, even if public facilities are built in the future, we considered it unlikely that the building will be built near the boundary as it is a large site.

Therefore, we decided to design this hair salon not only for the interior space but also for the landscape. And in order to continuously connect the landscaping to the interior design, we have chosen to use Ku-ki Bei (means wall of air). Ku-ki Bei is the wooden pole lined up at intervals of about 30cm, so that people can slip into it if they wish. This is why it allows to delicately separate the areas while letting through the light, the wind and the cats on the other hand. In addition, the sharper the angle between Ku-ki Bei and line of sight, the more line shape it changes on the surface, blocking line of sight.

Since this barber shop is run by one person, it was important to secure clear sight lines and at the same time it was necessary to gently divide the area in order to ensure client privacy. Whereas the Ku-ki Bei was very effective. The wooden posts were lightly connected with a laser cut 1.5mm thick anodized aluminum plate. Part of the connected columns also serve as a pivot for rotation and are designed to be movable when increasing the number of seats or in certain situations. The plan consists, from the entrance, of a waiting area, a reception counter, a table space cut out divided into left and right, and a shampoo area with raised floor for piping. A semi-circular curtain is also provided in part of the cutting table area. The area separated by the curtain will be a dressing room for the hairstyle and dressing of the Kimono for the ceremony.

Semi-DIY – The anodized aluminum plate that connects Ku-ki Bei and the pinus radiata laminated wood used for the tables, reception counters and benches were cut and drilled as is from the CAD data we created. This combination was achieved because aluminum is the only thing that can be made, laminated wood is the only thing that can be made, and the barriers to individual production in small quantities are lowered by digital manufacturing in Japan. So to speak, this is a semi-DIY that we ordered [cutting] and [drilling] from the outside and did [painting] and [assembly] By ourselves.

The reason for doing semi-DIY is not only personal interest in on-site fabrication, but also to create a sense of oneness with the space, for attention to detail and skepticism about assembly low cost and excessive ready-made products. This is due to concerns about the construction industry, which recently turned negative for unprecedented manufacturing. While studying with drawings, 3d and models, we managed the quantity of a large amount of screws, special screws, paints and hardware with Excel and placed an order.